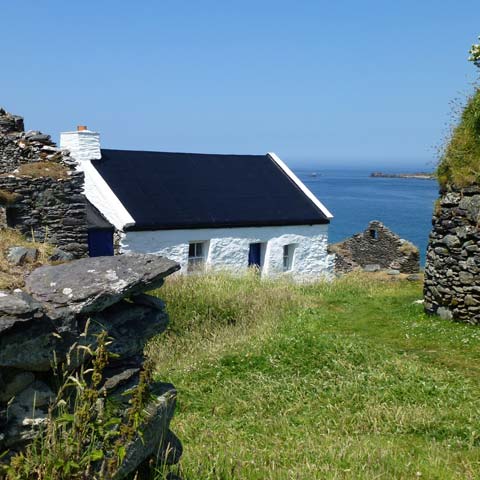 The Dingle Peninsula has the greatest concentration of archaeological sites in Ireland. From Kathleens, turn right for Aghadoe taking the road to Dingle town along the southern shores of the Peninsula via Milltown, Caslemaine, Inch and Annascaul to Dingle. [approximately 45min. drive from Kathleens]

From Dingle travel on and visit Slea Head, Dunquin, Ballyferriter.

Step back in time as you visit such treasures as the Kilmalkedar Church, The Dún an Óir Fort or Fort of Gold, and the Gallarus Oratory. Shaped like an up turned boat, the Oratory is the most perfectly preserved example of early Irish architecture.

The Fahan Group is a community of clocháns or beehive huts, souterrains, standing and inscribed stones, sculptured crosses, and earthen ring-forts. The beehive huts owe their name to the 5,000 year-old method of construction in which the dry stonewalls curve gradually inward.

It was from this area that St. Brendan the Navigator set out for America in the 5th Century, long before Columbus discovered it, centuries later. Nearby, the traditional fishing boats, known as Naomhógs or Currachs, are still made in the ancient manner of St. Brendan.

The Blaskets are the most westerly islands in Europe located off the coast. Ionad an Bhlascaoid Mhóir – the wonderful heritage centre at Dún Chaoin - celebrates the lives of the Islanders and the Irish language and culture.

The road brings you back into Dingle Town, a beautiful and charming fishing port where you may visit the town and have some lunch.

You then return from Dingle via the dramatically specactular Conor Pass - Ireland's Highest Pass - to Stradbally, Camp, bypassing Tralee town and back to Kathleens.

On the northern side of the peninsula, there are many lakes, rivers and unique flora and fauna due to the marsh valley floor. Visit Loch a'Dúin, one of the most important ancient sites in the region, which contains a remarkable series of monuments from the Bronze Age. Visit the charming village of An Clochán (Cloghane) and the communities of Bréannainn (Brendan).

The Ring of Kerry